Steve has been a student, performer, lecturer, demonstrator, teacher and now builder of magic. With over 40 years in the business he has gained immeasurable knowledge on the art and performance of magic. A disciple of the late Denny Haney, Steve says he learned from the best!
​​

Steve began his magical journey at just 11 years old when he met Denny Haney at The Magic Box in Eastpoint Mall in 1978. His love of the art of magic grew and by his teen years he was spending most of his free time hanging in Phil Thomas' Yogi Magic Mart, The Joker's Wild Magic Shop and The Funhouse Magic Shop.
​Any given Saturday, Steve would find himself in the company of Lou Walston, John Tabeling, Mike Schirmer, Mark Allen, Buck Clayton, Dick Kohlhafer, Dave Roemer, Phil Thomas, Howie Schwarzman, Bill Steinacker, George Goebel, McCarl Roberts, Marty Grams, Wayne Raeke, Bob Tilford and many more fantastic entertainers and personalties from the Baltimore Magic Scene.
Performing
In his late teen years, Steve started performing magic for local schools, Kiwanis clubs, Moose Lodges,
​Rotary clubs, and the Boumi temple. A highlight for Steve was meeting and performing for George Lewis while appearing on his TV show, Baltimore's much adored Captain Chesapeake. By his 20's Steve developed a routine and went on the road travelling regionally.  As he grew as a magicican, so did his act. Eventually he brought on two assistants and animals too.​
Haunt Life
In the early 90's, another dream turned to reality. Steve became the operator of the oldest haunted attraction on the east coast, Cox's Point Haunted Mansion in Essex, Md. For the next 23 years he utilized his skills as a magician to develop a notable & unique Haunt, by incorporating illusionary concepts, something seldom seen in the haunt industry. Steve built Illusions such as Spidora, Living Half Lady, Floating Seance table, Talking Head, Girl to Gorilla, Peppers Ghost, Burned Alive, Cargo Cage Vanish, & The Monster Guillotine. While there were many others there were 2 that really stood out. An interactive exorcist scene with Regan inexplicably hovering at 6 feet above the bed, and the famous Horror-Vator / Hellavator. You and your group were generally running from a hungry zombie fest and the entrance to the horror-vator looked like your ticket to safety, until the door closed. It was obvious you were going down but how far? The only stop - 13th floor down.​ 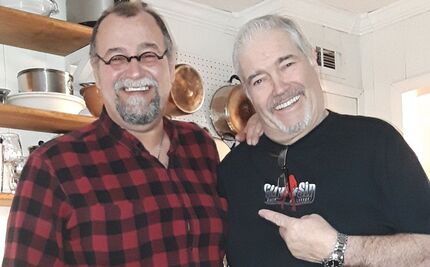 This "About" section is not complete without adding Marty Grams!
Often Steve will spend hours on the phone with Martini hashing out ideas and methods. Marty has been an integral, motivational & supportive aspect of Steve's magic and personal growth. Marty's guidance has been a blessing. Friendship is Magic!
In 2018 Steve retired from the haunt industry, and immediately started working on plans to make his products available to the public. The following year Steve and his family moved to Maryland's Eastern Shore. His goal is to offer quality classic magic, at fair prices with the best materials available. What you get is his commitment to you, to make custom made quality magic, ​one magical piece at a time. ​
INTERNATIONAL BUYERS:
Please be advised the option for check out for international orders is no longer available on our website. We have experienced many problems with international orders including lost packages, stolen packages, excessively late packages, and even getting scammed by international buyers.

Currently we are only shipping within the u.s., continental u.s., the UK and established customers.
If you would like to order and live the u.k. or have successfully ordered previously please email your order to MyersMagicsales@gmail.com.